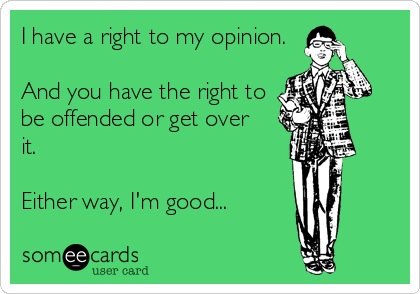 I despise the word “offended.”  It is not a word I use to describe myself except in the ironic sense – i.e. That completely offends my sensibilities. <wink wink nudge nudge> – because I abhor its underlying implication.

Today’s political climate is consumed with shutting down dialog.  We are inundated on a nearly daily basis with stories of some segment of the population that has been offended by the actions or views by some other segment of the population.  At the core, these claims are designed to terminate the actions or speech of the “offending” group.  It is almost always bogus indignation, and even if it is legitimate, what difference does it make?  The last I checked, the Constitution was still the law of our land, and every individual has the right to hold views and make statements that may offend others.

Get used to it.

I had a conversation with a friend about this very issue recently, in a much more personal context.  It doesn’t change one iota of what I have said.  The intention is exactly the same…you have offended me with your <insert issue here>, and I want you to stop doing it.  There is no opening for dialog or discussion.  There is no opening for a mutually respectful conversation.  There is only an opening for listening to the reasons why you offended, and the reason why you should stop saying or doing that which offended.

It can be (and often is) enough simply that you offended.  Why is immaterial, you offended and you must stop offending.  Even if the relationship is over and there is no avenue for reconciliation, the burden of responsibility is still on the offender to fix him/herself.

This is stupid, and useless, because it accomplishes nothing.

I want to accomplish something in my life, and I don’t want to…I will not…do it by silencing opposing views. Say what you will, it does not offend me.

Anger me?  Probably more than once.

Embitter me?  On occasion.

Eventually I will develop a thick enough skin that even the most infuriating things will roll off.  Eventually I will overcome the bitterness and cynicism that roots in.  What I will not do is be victimized by someone else’s words.  And I will not attempt to silence them.  I may despise what you say, but I will defend your right to say it. That’s the bottom line.

There is a lesson that can be gleaned from Voltaire in this regard:

The men who had hated [the book], and had not particularly loved Helvétius, flocked round him now. Voltaire forgave him all injuries, intentional or unintentional. ‘What a fuss about an omelette!’ he had exclaimed when he heard of the burning. How abominably unjust to persecute a man for such an airy trifle as that! ‘I disapprove of what you say, but I will defend to the death your right to say it,’ was his attitude now.  —S. G. Tallentyre, referring to Voltaire. Often attributed to Voltaire.

Voltaire really had it right.  We should do no less.

1 Whoever isolates himself seeks his own desire;
he breaks out against all sound judgment.
2 A fool takes no pleasure in understanding,
but only in expressing his opinion.
3 When wickedness comes, contempt comes also,
and with dishonor comes disgrace.
4 The words of a man’s mouth are deep waters;
the fountain of wisdom is a bubbling brook.
5 It is not good to be partial to[a] the wicked
or to deprive the righteous of justice.
6 A fool’s lips walk into a fight,
and his mouth invites a beating.
7 A fool’s mouth is his ruin,
and his lips are a snare to his soul.
8 The words of a whisperer are like delicious morsels;
they go down into the inner parts of the body.
9 Whoever is slack in his work
is a brother to him who destroys.
10 The name of the Lord is a strong tower;
the righteous man runs into it and is safe.
11 A rich man’s wealth is his strong city,
and like a high wall in his imagination.
12 Before destruction a man’s heart is haughty,
but humility comes before honor.
13 If one gives an answer before he hears,
it is his folly and shame.
14 A man’s spirit will endure sickness,
but a crushed spirit who can bear?
15 An intelligent heart acquires knowledge,
and the ear of the wise seeks knowledge.
16 A man’s gift makes room for him
and brings him before the great.
17 The one who states his case first seems right,
until the other comes and examines him.
18 The lot puts an end to quarrels
and decides between powerful contenders.
19 A brother offended is more unyielding than a strong city,
and quarreling is like the bars of a castle.
20 From the fruit of a man’s mouth his stomach is satisfied;
he is satisfied by the yield of his lips.
21 Death and life are in the power of the tongue,
and those who love it will eat its fruits.
22 He who finds a wife finds a good thing
and obtains favor from the Lord.
23 The poor use entreaties,
but the rich answer roughly.
24 A man of many companions may come to ruin,
but there is a friend who sticks closer than a brother.

Borrowed from Whatever I Think. Click on the pic to check out her blog!

It’s Christmas time.  Really, it is, though in government schools, among myriad other places, you wouldn’t know it.  Why?  Because Christmas, and any reference to it, is being systematically squelched.  It should amaze everyone that here, in 2012, in the freest nation on earth (well, at one time), we can’t publicly celebrate Christmas!  At least, we can’t anymore without some recrimination.  This has become one of the many things I hate about Christmas.  Where has the good will among men gone, because it surely is not widely evident, not even in the Christmas season when it should be modus operandi.

As I headed into the grocery store last week, I encountered one of the ubiquitous Salvation Army bell ringers.  He wished me Happy Holidays, and I responded with Merry Christmas.  He had the audacity to chide me for that (Really!!), telling me I ought to say Happy Holidays, that it was better…and safer…these days.  Better for whom?  Safer for whom?  And who cares!?  This stance that we have to curtail our Christmas spirit (or have it forcibly curtailed) is stupid and infuriating, and yet in so many cases we who celebrate Christmas just shrug our shoulders as if there’s nothing we can do, so why bother trying.

Did you catch the irony that the bell ringer is working for a Christian organization as a Christmas employee, during the Christmas season…the season of giving…and during the Salvation Army’s largest fundraising event of the year?!  I did, and I told him I did not believe in wishing Happy Holidays to everyone, when in fact I (and most others) are celebrating Christmas!  (What I didn’t say was that I didn’t appreciate being chided for Christmas greetings, and that if he was looking for donations, that was a really poor way to go about getting any.)  I did pass along my annoyance to the Salvation Army, however, and they (shockingly) responded…appropriately (to me), and (hopefully) appropriately to him.

Every single day I read or hear on the news about the latest assaults on Christmas.

It goes on and on.  You can see the evidence of this even in Hollywood, with fewer Christmas movies coming out this year than in years past.  I don’t know about you, but I love Christmas movies:  Elf, A Christmas Story, National Lampoon’s Christmas Vacation, How the Grinch Stole Christmas…  They’re  like Christmas music for me – a way to capture the magic of the season for a moment, and to celebrate what should make Christmas the most wonderful time of the year.  They’re  a momentary escape from some of the rotten realities of the season…like this ongoing war against Christmas.

What is astonishing is how infrequent it is that those who are exposing all of this anti-Christmas foolishness are not pointing out time and time again – loudly – how no one is seeking to ban anyone else from celebrating their holiday of choice.  There is no movement to stifle Chanukah celebrations in this country.  No backlash against Kwanzaa.  No attempts to silence Ramadan observance.  If anything, these holidays are protected and preserved, as are those who celebrate them.  But Christmas…an official national holiday…is being silenced little by little, all in the name of fairness, equality, and the right to live unoffended.

Well, what about me?  It offends me to CENSOR Christmas.  It offends me that we have become a nation so over-sensitive to being offended that we stifle our own expressions of faith and joy lest we offend others who are expressing their faith and joy (publicly) in a different way.  It’s stupid!  It’s infuriating!  Perhaps most of all (and in my opinion), it seeks to devalue the real reason for Christmas to the point where there is barely a vestige of Christ left in Christmas.

Truly, what I wish is that Christmas…Christmas…CHRISTmas…would be valued more as a celebration of Jesus’ birth than a holiday for extravagance and decadence.  At the minimum, I wish that this ridiculous notion that those who celebrate differently are offended when Christmas is celebrated openly, publicly & joyfully would be put to rest.  It’s not the case…at least, not in this country, and we should not behave as though it is.

So, that’s how I am celebrating, and I’m starting by wishing you all a bold & joyous Merry Christmas!